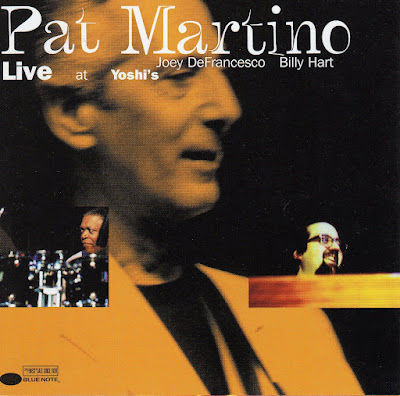 Live at Yoshi's is an album recorded by jazz guitarist Pat Martino in 2001. It was nominated for the 2002 Grammy Award for Best Jazz Instrumental Album.

That Pat Martino's new Live at Yoshi's is a stunning display of jazz-guitar prowess should come as no surprise to anyone familiar with the six-string legend. That the disc is one of those lucky live albums that captures a night when everything seemed to be falling into place for Martino and his trio of organist Joey DeFrancesco and drummer Billy Hart is perhaps more than even the guitarist's most ardent admirers could have hoped for. DeFrancesco and Hart are both predictably awe-inspiring, but it's the telepathic chemistry between the three band members and the understandably thrilled audience that really blasts Live at Yoshi's into a higher realm of live jazz albums. The trio's interplay on the laid-back version of "All Blues" seems to reach a new peak with each chorus, culminating in Martino's beautiful closing unaccompanied cadenza, and the guitarist and DeFrancesco seem to inspire each other to ever greater heights on the ballad "Welcome to a Prayer." Those enamored of Martino's fleet-fingered heroics will have plenty to feast on here--from the breakneck tempo of the opening "Oleo" to the hard-swinging "El Hombre," Martino and DeFrancesco trade lines with an assurance that few musicians can muster. Martino has one of the more inspirational personal stories in music. A guitar legend in the '70s, he had to completely relearn the instrument after a near-fatal brain aneurysm in 1980--and he can now lay claim to one of the more inspirational live albums released in years.

With Live at Yoshi's, his 20th recording as a leader and third release for the Blue Note label, the legendary Pat Martino has come full circle. Accompanied by Joey DeFrancesco on Hammond B-3 and Billy Hart on drums, the hard bop and funky soul-jazz of this trio are sure to please enthusiasts of the guitar, organ, and drum trio. Martino, heir to Wes Montgomery's warm, bluesy guitar style, plays eight great compositions, including two great extended versions of the classic Miles Davis compositions "All Blues" and "Blue in Green." On "All Blues," creative guitar voice plays the melody with soulful interpretations and subtle musical resonance. Martino's version of "Blue in Green" creates a world of melancholy and the guitarist plays his guitar with the same sweet sadness as Miles did with the support of DeFrancesco's organ solo adding additional shades of emotion. The songs selected for this "live" performance recording also appear on previously recorded Martino projects, including his 1970 Desperado album and his 1998 Stone Blue CD. However, listeners now receive the benefit of having the set performance available in real time. From the sound of the audience on Live at Yoshi's, the guitar sage's head-spinning dexterity and cool tones on "Catch" are more spirited than ever, and after listening to this CD, you'll be inclined to agree.

All compositions by Pat Martino except as indicated