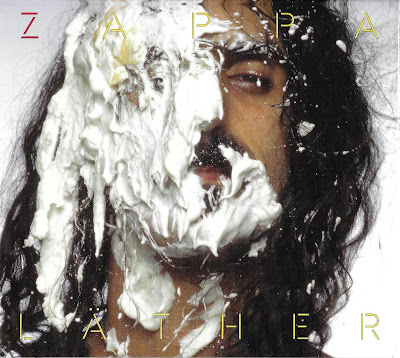 ''Läther'', is the sixty-fifth official album by Frank Zappa, released posthumously as a triple album on Rykodisc in 1996.
The official version of Läther was released posthumously in September 1996. It remains debated whether Zappa had conceived the material as a four-LP set from the beginning, or only when approaching Phonogram; In the liner notes to the 1996 release, however, Gail Zappa states that "As originally conceived by Frank, Läther was always a 4-record box set." Along with most of Zappa's material, a "mini-LP" CD edition was also released by Rykodisc in Japan, with the artwork reformatted to resemble the packaging of a vinyl album. In December 2012, the album was reissued with different packaging that better reflected the intended album cover.

The recordings for the album were originally delivered to Warner Bros. in 1977. Contractual obligations stipulated that Zappa deliver four albums for release on DiscReet Records, which eventually resulted in much of the material on Läther being released on four separate albums: Zappa in New York (1977), Studio Tan (1978), Sleep Dirt (1979), and Orchestral Favorites (1979), only the first of which was produced with Zappa's oversight. Zappa had planned to include much of the material from these albums as a quadruple box set entitled "Läther", but Warner Bros. refused to release it in this format. However, bootlegs of the original recording had existed for decades before the album's official release as a result of Frank Zappa broadcasting it over the radio in 1977 and encouraging listeners to make tape recordings of it.

Gail Zappa has confirmed that the 2-track masters for the planned original album were located while producing the 1996 version. While the official CD version of Läther released is reportedly identical to the test-pressings for the original quadruple album, four bonus tracks were added to the 1996 release and the title of the song, "One More Time for the World" was changed to "The Ocean is the Ultimate Solution", the title under which the same song appears on the album Sleep Dirt. The album does not include "Baby Snakes", a song which was originally planned for the album. A version of the song served as the title of the film from the same era.

Zappa managed to get an agreement with Phonogram Inc. to release Läther in its original configuration, and test pressings were made targeted at a Halloween 1977 release, but Warner Bros. prevented the release by claiming rights over the material. Zappa responded by appearing on the Pasadena, California radio station KROQ, allowing them to broadcast Läther and encouraging listeners to make their own tape recordings. After Warner Bros. censored Zappa in New York to remove references to Angel guitarist Punky Meadows, and demanding four additional albums, a lawsuit between Zappa and Warner Bros. followed, during which no Zappa material was released for more than a year. Eventually, Warner Bros. issued Studio Tan, Sleep Dirt and Orchestral Favorites. The original cover artwork had featured a photograph of Zappa in blackface and holding a mop; this photograph was eventually used as the cover for Joe's Garage, Act I.

In the spring of 1977, Frank delivered the master tapes for a four-record boxed set called Läther (pronounced “leather,” due to the umlauts over the A) to Warner Bros., who then decided not to pay the amount they contractually owed him, oafishly thinking that he’d frivolously thrown the package together just to speed along his remaining album requirements, thereby freeing himself from his recording contract. He retrieved the tapes and offered the set to EMI instead. Warner, currently being sued by Frank (who wanted the rights to his old albums, plus damages for years of bad bookkeeping and deficient royalties), threatened EMI with a lawsuit, scaring them out of negotiations. Frank then tried Mercury/Phonogram, who was to press and distribute the set as the first release on Zappa Records; but after it had gone through the test-pressing phase and had even been assigned a catalogue number, they suddenly refused to distribute it, as someone there had noticed its “offensive lyrics.”

He resorted to splitting the set into four separate LPs, leaving out all linking transitions, adding a few songs and omitting others. He delivered the first Läther-ette, Zappa in New York, with packaging and liner notes that were preserved when Warner finally released the album on DiscReet. Shortly after providing that live double-disc, he handed over the other three all at once, fulfilling his contractual obligations anyway. Whether he planned to turn in his packaging designs upon being paid for these three, submitted designs that were ignored by Warner, or was shut out of the process as soon as they had the actual tapes, the albums were ultimately issued with sequencing and artwork that he hadn’t approved.

Before Warner could begin these staggered releases, Frank played the orignal Läther in its entirety on KROQ-FM (Burbank-Pasedena, California), encouraging listeners to record it off the radio. The conflicting report that the four separate albums came first, and were rearranged into Läther after Frank learned that Warner wouldn’t pay fairly, is false, according to Gail Zappa’s booklet notes in the CD set: “As originally conceived by Frank, Läther was always a 4-record box set.” The triple-CD package was released in 1996 on Rykodisc. Four bonus songs were added, extending the length to nearly three hours. Included were a 1993 remix of “Regyptian Strut” (spelled without the hyphen this time, as on Sleep Dirt); Frank’s opening and closing comments on the radio at the time of his broadcast; a piece called “Leather Goods,” which was made up of unused Lumpy Gravy dialogue, some Gravy-reminiscent instrumental music, and the original beginning of “Duck Duck Goose” (which included Led Zeppelin’s “Dazed and Confused” riff before the “Whole Lotta Love” one heard on Läther proper, as well as two solo breaks, tributing Jimmy Page’s in “Whole Lotta Love” and “Heartbreaker”); “Revenge of the Knick-Knack People,” heard during some of the non-stage segments in the Baby Snakes movie; and the instrumental “Time Is Money” (included on Sleep Dirt but not Läther itself).

Gary Panter, an artist best known for his work in Raw Comix, was responsible for the illustrations on the covers of Studio Tan, Sleep Dirt and Orchestral Favorites. Frank hadn’t chosen Gary’s work; one of the titles wasn’t his, either. “I might point out that [Sleep Dirt is] not the name of the album,” he told Record Review in the spring of 1979. “That’s just a further violation of the original contract. The original title of that album, as delivered to them, was Hot Rats III. I presume that’s just another snide attempt to undermine the merchandising of it. If you saw an album sitting in the rack with the title Sleep Dirt on it, you probably wouldn’t be too intrigued by it. And based on the job they did with the cover of Studio Tan, they made [all of the packaging] as unappealing as possible.”

The full saga of Läther (pronounced leather) is tangled enough to give a migraine to all but committed Zappaphiles. Basically, what you need to know is that this project was originally conceived of as a four-record box set. When record company politics prevented its release in that format, much of the material was spread over the albums Live in New York, Sleep Dirt, Studio Tan, and Orchestral Favorites. This three-CD set presents the album as it was originally conceived, with the addition of four bonus tracks at the end. It mixes previously available material, alternate mixes, and edits, and previously unissued stuff, though only the most serious Zappa fans will have a good grip on exactly what has appeared where (the liner notes are surprisingly unexact in this regard). And the music? It's almost like a résumé of Zappa's bag of tricks: Uncle Meat-like experimentation, intricate jazz-rock, straight hard rock, orchestral composition, and comedy. Some of those comedy tracks became some of his most notorious routines, like "Punky's Whips" and "Titties 'n Beer," which amounted to avant- rock for drunk frat boys and pot smoking, underachieving junior high school students. The juvenile humor, hamfisted parody of hard rock clichés, and the shaggy-dog opera of the 20-minute "The Adventures of Greggery Peccary" are outshone by the lengthy, more experimental instrumental passages. It's interesting, but exhausting to wade through all at once, and the avant-garde/composerly cuts are not as exceptional as his earlier work in this vein in the late '60s and early '70s. That means that this will appeal far more to the Zappa cultist than the general listener, though the Zappa cult -- which has been craving Läther in its original format for years -- is a pretty wide fan base in and of itself. [In 2005, Rykodisc made available the Japanese Mini LP replica version...which is a bit strange since Läther was never officially released on LP.]