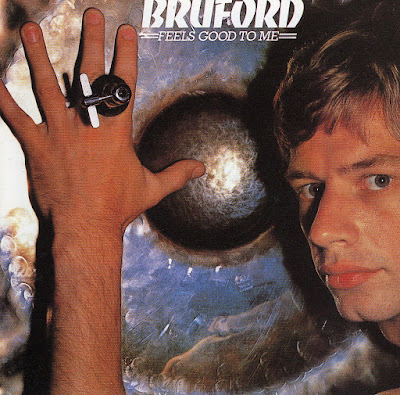 Feels Good to Me is the debut solo album by the British drummer Bill Bruford. The band Bruford grew out of the line-up assembled for this album. Led by drummer Bill Bruford, the album also features guitarist Allan Holdsworth and John Goodsall, bassist Jeff Berlin, keyboardist Dave Stewart, and ECM flügelhorn stalwart Kenny Wheeler. He also enlisted singer and songwriter Annette Peacock. Musically, the album does not sound like the early Canterbury sound but is more reminiscent of contemporaries Brand X, with whom they shared guitarist John Goodsall. The album, released in August 1978, is also considered a "vanguard of progressive jazz improvised music"

With a career that was first defined by his metrically-challenging work and instantly recognizable drum sound with progressive rock groups Yes and King Crimson, nothing could have prepared anyone for the surprise of drummer Bill Bruford's first solo release, Feels Good to Me. While Bruford's signature style—a mathematically-precise approach that never failed to find the innate groove in even the most complex of time signatures—was in clear evidence, the album didn't sound like a drummer's solo album. The emphasis was on composition, and while others in the group — including Hatfield and the North and National Health keyboardist Dave Stewart, on-the- ascendance guitarist Allan Holdsworth and the then-unknown electric bassist Jeff Berlin. Bruford made it clear from the get-go that his role as bandleader was to be that of an equal contributor rather than a dominant voice. And while these late-'70s releases—Feels Good to Me, One of a Kind, Gradually Going Tornado and The Bruford Tapes — clearly emerged from a progressive rock sensibility, they also demonstrated a harmonic depth that echoed Bruford's longstanding interest in jazz albeit, in the case of these recordings, more of the fusion kind.